Commemorating 100 years since the end of the Great War has given me the opportunity to work on two wonderful projects with two very different groups.

‘Remember Their Stories’ was a very special project for Chillingham Road Primary School in Newcastle. The school is still in its original Victorian building and has its very own museum looking back at the life and times of the school and it’s pupils. Included in the museum is information about the 66 ‘ old boys’ who went to fight in the Great War and never came home. Their names are recorded on a special plaque, now prominently displayed in the museum.

An earlier local history project records the stories of these boys and maps where they lived.

To reflect the ethos of the school, this art project needed to involve all the children in the school, from playgroup to year 6, and also their families. I had to come up with a proposal that would get everyone thinking about the centenary of Armistice and would let all the school help make the artwork.

The location of the artwork was chosen by the school, it needed to fit on a tall, narrow wall (approximately 3m x 0.4m) and could wrap around the surrounding walls. This space made me decide to include a figure, a soldier, and poppies- the iconic symbol of remembrance. I wanted to make links between the local area and the soldier and thought this could be shown by postcards written as if from the war to someone back home in Heaton. Then I thought that the postcards could be carried by doves- symbolising peace. Initially I included the dates of the Great War but school asked for this to be changed to the centenary dates. As part of my research I found a clip of an interview with Michael Morpurgo, author of ‘Private Peaceful’ and ‘War Horse’. In the film he visited the war graves and said that he wrote his books because ‘we must remember their stories’. Immediately, I could see how perfectly this line captured the essence of our art project.

So, with the composition planned, and agreed by school, I needed to work out how the piece could be made and who would do what. I made a list of the tasks, discussed them with school and suggested what might be appropriate for each year. School then devised a timetable for me to work with and we were off!

Straight after the half term holiday we began a week of workshops. An initial assembly saw me introduced to the whole school and then we were off! 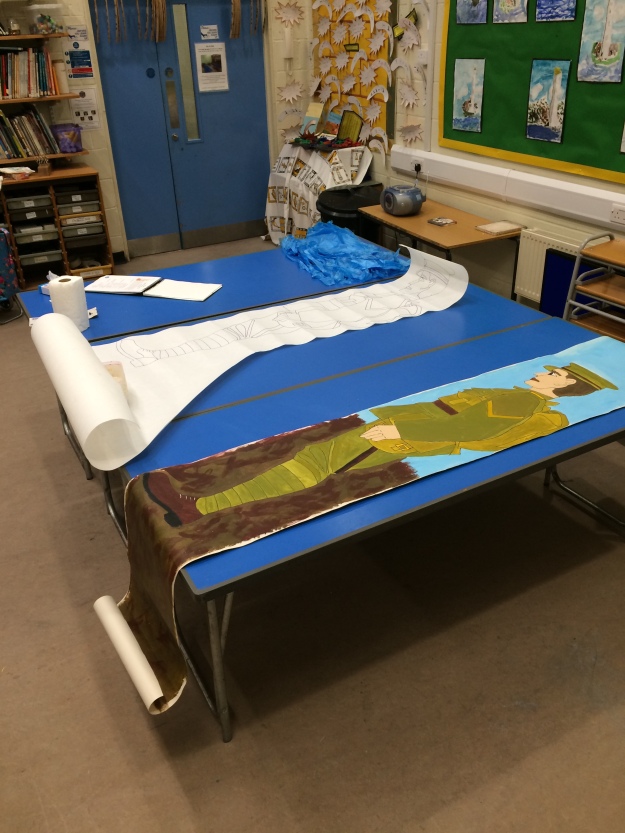 My first workshop guests were the youngest children in school- playgroup, nursery and reception. I explained to each group that we had the very important job of preparing all the colours of fabric so we could make the plain white picture as colourful as the painting.

I had set up 3 work stations, one each to make ‘mud’, ‘khaki uniform and blue sky. We used the squeezy bottle dye method as it is the least messy and as the dyes are made up in advance there’s very little risk of dye powders getting spread about.

(It did get a little messy – apologies if you had blue hands afterwards!)

Next was a change of task as the tinies were replaced by years 5 & 6.

I asked these groups to make doves. They used templates to cut the shapes from white felt and then they customised them with sequins for eyes and beaks. 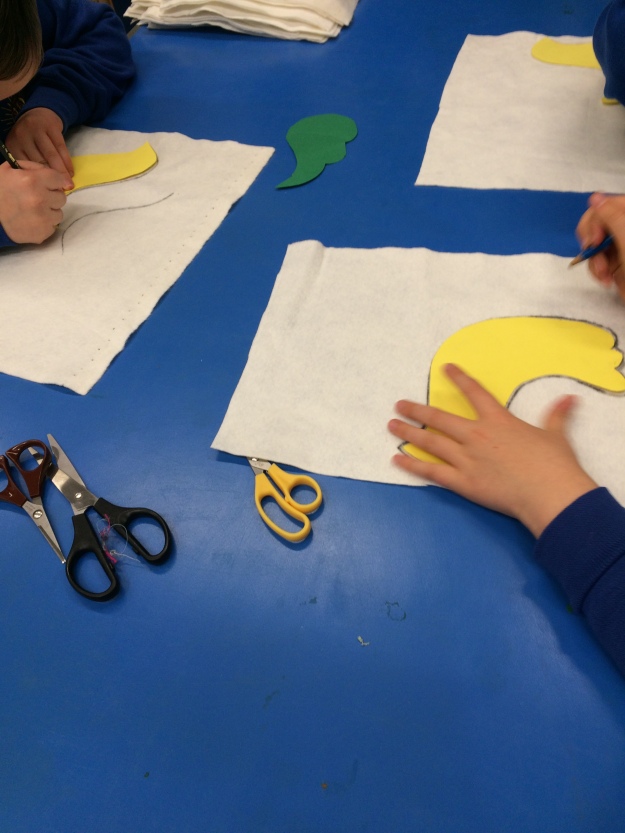 Tuesday brought workshops for years 1 & 2 and also for families. It was our Poppy Day. The poppies were made by wet felting merino wool fibres. 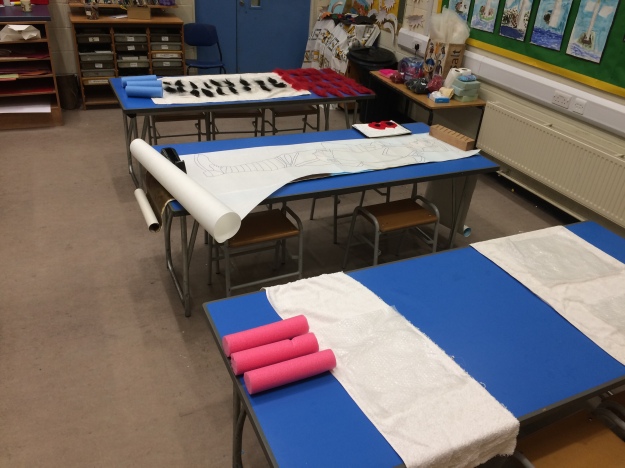 We used bubble wrap grated soap and warm water to felt the poppies, with some groups using swim ‘noodle’ rolling pins to add pressure to the fibres. After felting the fibres were ‘shocked’ in hot and cold water then left to dry.

Our next sessions were on Thursday. Years 3 & 4 has the task of starting to assemble the artwork, and writing their own postcards from the Front. There were different work stations so groups could take turns at all the tasks. One group was tearing the dyed fabric into small pieces, another was using these pieces to collage the picture and a third group were printing and writing their postcards.

The postcards were made from pelmet vilene cut to size. The children chose a ‘postcard’ stamp another ‘postage’ stamp and then thought about what a soldier might want to write home- lots of ideas about the noise and squalor, rats, trench foot and injuries.

On Friday, years 5 & 6 came back to print their postcards and help with the collage. 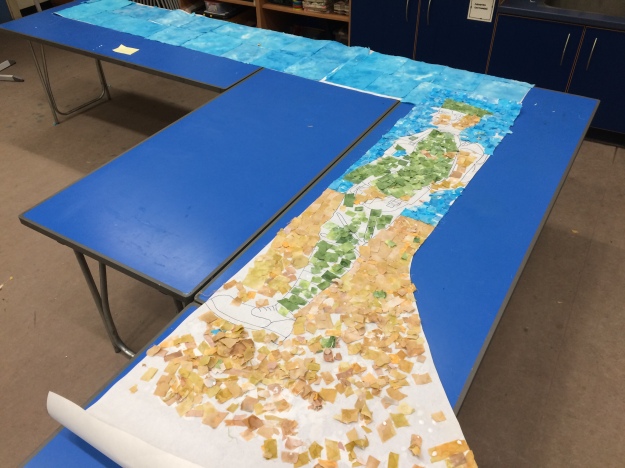 We also cut out the letters and numbers for the title and dates.

Also on Friday, Year 6 gave their Assembly on Conflict, including a section where they interviewed me about the project and my work as an artist!

Then the Head teacher led the school outside to the yard where a very moving Remembrance act took place. With the school gathered in a circle, teachers read out the names of all the young men from the school who had died, the Head Teacher read The Exhortation, a two minute silence was observed and the Last Post was played.

Over the weekend, the doves and postcards were attached to the sky and then the poppies were stitched onto the muddy soil

Finally, on Monday we were ready for installation- with help from the head teacher and the business manager our ‘Tommy’ was up in the school museum and the doves were flying over the streets of Heaton, carrying their heartfelt messages to families and friends. 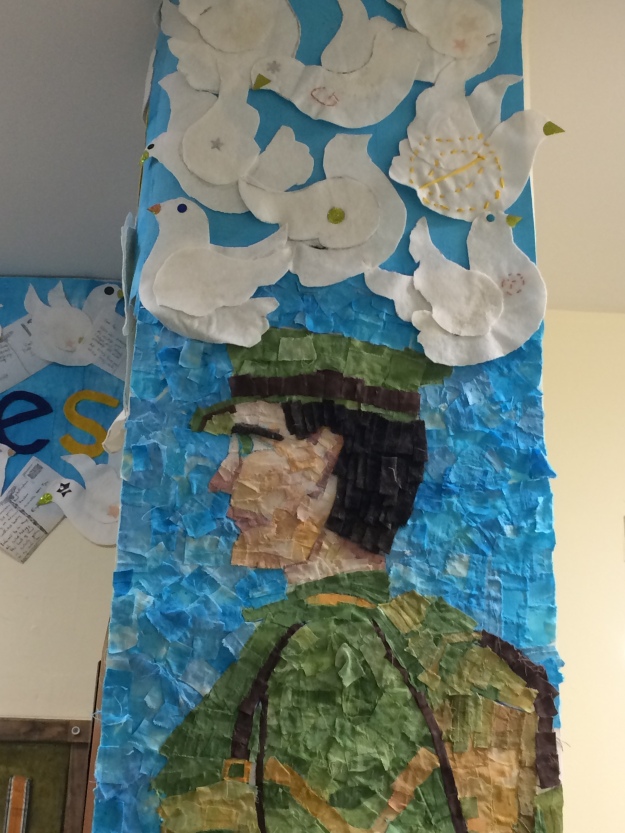 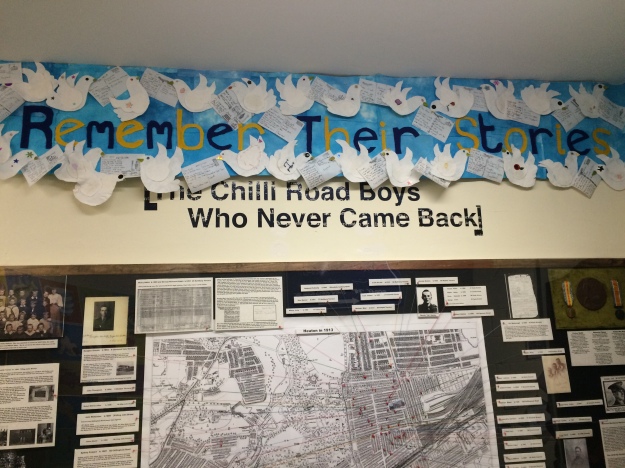 It was fantastic to be able to involve the whole school in this project. Now the work is on display and its location means that the children will be able to see what they achieved every time they walk through the school to the dining hall. I hope they will remember working together in order to make art to remember those young men from a hundred years ago who gave their lives for our future.

1 thought on “Art of Remembrance”