It’s been a day of stitching – eight hours at the machine today – anyone know a good masseuse??

New needles and metallics have arrived! Needle breakages won’t be a problem now!

All of the sea is now stitched, I’ve really enjoyed working on it, building ripples and waves into the surface to give a sense of movement to the work. I’ve got two of the three panels hanging up together in the studio whilst I work on the third – sometimes, out of the corner of my eye, I think I see the waves rolling in – but maybe that’s the effects of a long day stitching! 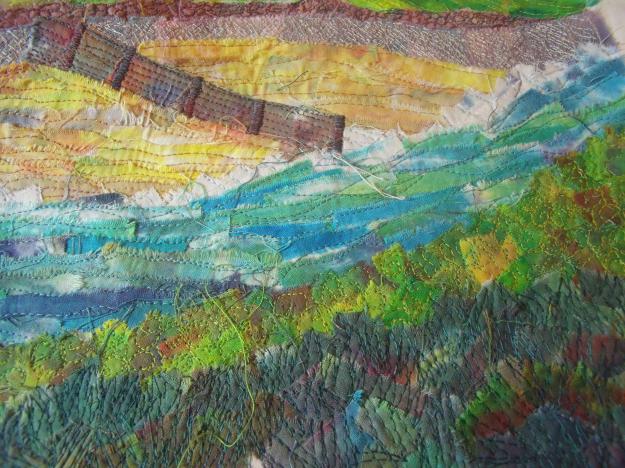 This section is on the final panel, the last bit of the sea – as it calms down and wends its way around the headland. I’ll add some of the metallic threads tomorrow, to show sunlight glistening on the waves.

There’s a bit more to do on the garden – makes a change to be doing greens not blues! You’ll see that I’ve been changing the direction of stitch to differentiate between surfaces – water, sand, bushes.

I was certainly very glad to get to the end of the sea wall this morning – and no more broken needles!

Here, you can see the garden fence going in, with zigzag stitch used on the grass in front of it. Zigzag still works when doing free machine embroidery and its possible to stretch and curve the zigzag to create texture effects.

Time to do some shoulder and neck stretches now – ready for the home straight tomorrow!