Another busy day stitching – you can tell because the fabric piles aren’t quite so neat and tidy today! 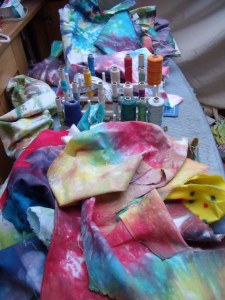 I paid a visit to the local library this week and was delighted to discover a copy of ‘Threads – The Delicate Life of John Craske’ by Julia Blackburn.  The book tells the story of the author’s investigations into the life and work of Craske, crippled by a mysterious illness, he could no longer work as a fisherman/ fishmonger and turned to painting and, later, embroidery. His work was shown in London in the early part of the twentieth century but unlike Alfred Wallis, the painter fisherman of St Ives, he slipped out of view until this book was published last year. Intrigued by his story and by Blackburn’s prose I brought the book home and began to read – one passage caught me up short, it seems to capture some of the meaning I am trying to show in our project – My Journey

‘All these fragile vessels: tossed by waves and sometimes almost engulfed by them, out there in the vastness of the ocean. Some were pinpointed by the angled glare of a lighthouse like the eye of God staring straight at them, others had smoke billowing from their funnels as they tried to  plough a way through a storm. I had the sense at once that it was all true: the tilt of a boat in relation to the swell of the waves and the strength of the wind; the rigging, the billowing of the sails.’

I don’t credit myself with a fisherman’s knowledge of boats and I hope our lighthouse will seem more welcoming rather than glaring – but I did feel a connection as I read these words. (You’ll have to wait until I’ve finished the book and returned it to the library if you want to read on!)

I’ve been working on the town and the light house this week. The reason the fabrics are so muddled is because I’ve been searching for pieces to become rooftops – with slate or terracotta tiles, walls – either painted or brick, and stone for the lighthouse. So there’s been a lot of rummaging, ripping and snipping going on! 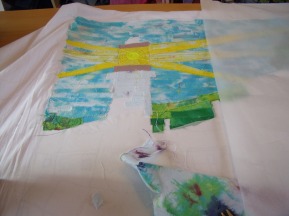 Larger pieces of fabric used to construct the buildings

Checking how these two panels link together

Don’t worry if you’ve not been mentioned – I’ve got a lot of blues and greens saved up for the seas!

I’ll be back soon!

Back from a service and stitching so sweetly 😊🧵🪡 Thanks to North East Sewing Machines 👏
These two golden oldies off for a well earned service today so I guess it’s a sketchbook day for me!!
The weather was suitably ‘wuthering’ on a trip to Haworth and the Brontë Parsonage 🌧
Bronte Moors
Doughnut munching culture vultures 😁
A different park to walk around this evening 😊 a mini break in Yorkshire- getting culture and proper tea ☕️😁