I’m  busy working on a commission at the moment so I thought I’d share its development. 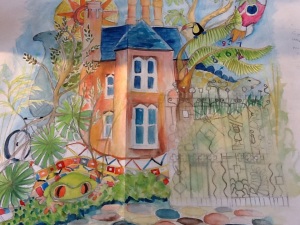 The idea is that it captures themes in the work of the commissioner – so there is a link to the seemingly random composition of space rockets and dinosaurs! There’s more detail to be added but I find that I get so far with the paper prep’ and then have to dive in with the fabric and threads.

I’ve been working through the layers in the design, so the background sky is hand dyed fabric mounted on Pelmet Vilene to give support. I worked the stylised sun and the building separately before applying them to the background – I do this because it can be tricky working through several layers of vilene and also, if mistakes are made, I only have to redo that element – not the whole piece! 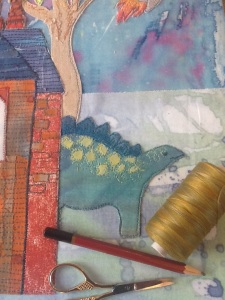 I’ve also put some thought into trying to make the scene work, despite the disparate elements. So the rocket shoots up

into space with Rainforest trees between it and the dinosaur, this gives a bit of depth to the scene – I hope!

I’ve been using the beautiful Bernina to do the stitching – it’s coping well with the layers! 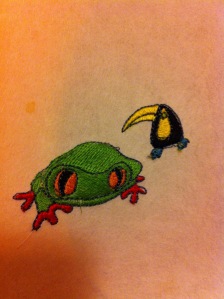 However, I’m working on these two creatures with the Super Galaxie- translating my sketches into Computer Aided Embroidery. First draft- they came out too small, so I’ll rescale them and try again – I think the dense stitching and shinier Madeira threads make them seem quite jewel like.

I’m thinking that the metal gate, roughly sketched on the design, will be done on vanishing fabric. It’s quite large but I’ve done pier railings this way before…